5 myths about playable ads that are ending here and now 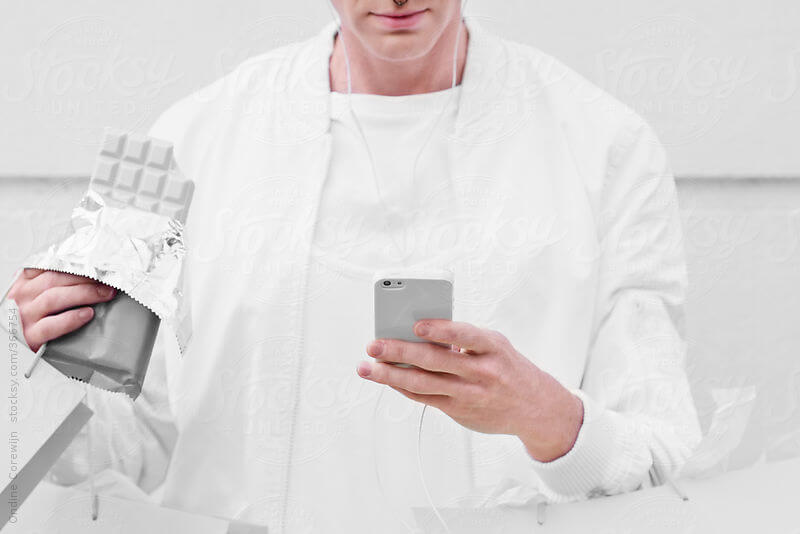 Playables are incredibly effective for driving higher engagement, boosting conversion rates, and giving unique insights to optimize your entire UA strategy. But many myths about their cost, complexity, and performance still exist. That’s what this article is all about. Here, John Wright, Head of Global Growth Partnerships at Luna, discusses 5 common myths about playable ads and uncovers the truth for each. 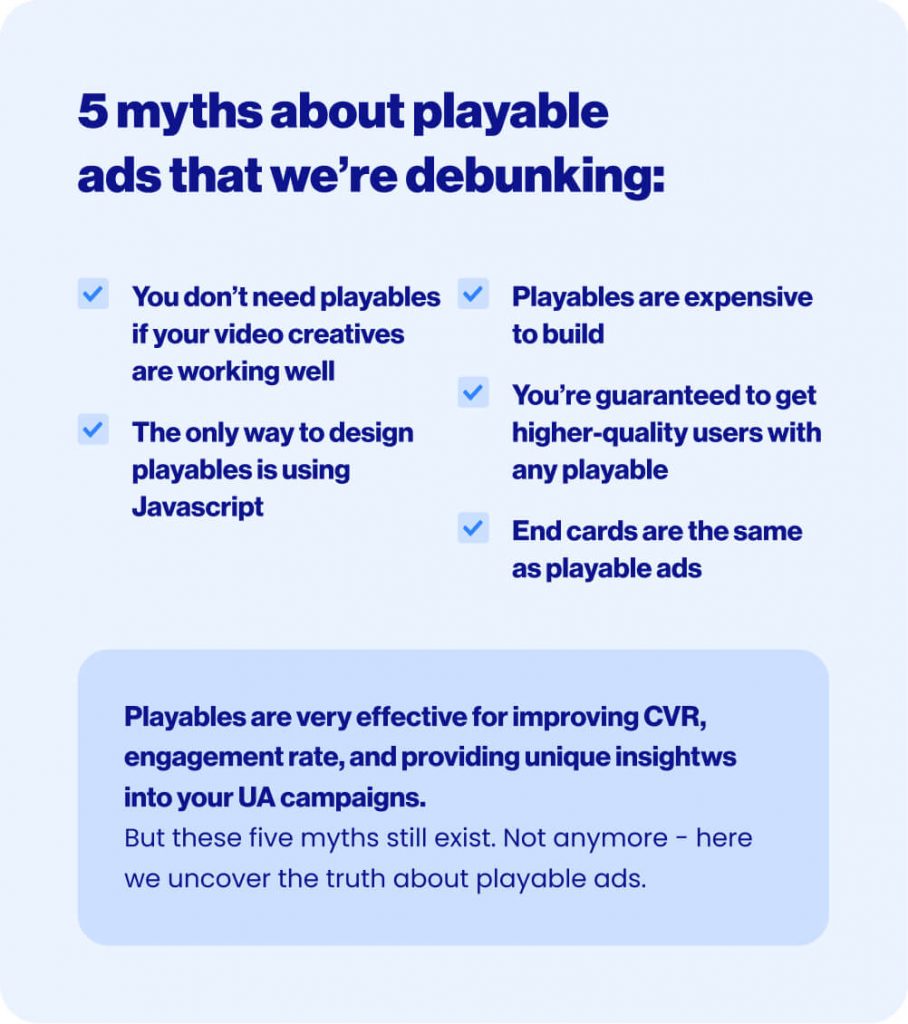 Myth 1: My video creatives are performing well, so I don’t need playables

It’s easy to think that if your video creatives are performing well, there’s no room for playables - but it’s important not to limit your creative strategy. Using a wider variety of ad types creates more opportunities to test and improve performance, which is a benefit no matter your game or genre.

Different ad sources - from SDK to social channels - reach different audiences, which means playables could resonate better with some users compared to video across different sources. You’re not stealing traffic from your video creatives - this scale represents incremental growth.

In other words, it’s not a “one or the other” choice when it comes to your creatives. In fact, you can turn your top-performing playables into winning video creatives. Finding a hero creative set that translates into both interactive and static creatives expands your opportunities to reach more users and maximize growth.

Video is largely a black box when it comes to analytics, but playables have in-ad events that give you greater transparency into the user journey.

One of the reasons why playables tend to perform better is that they give you access to in-ad events. Video is largely a black box when it comes to analytics, but playables have in-ad events that give you greater transparency into the user journey. You can set up events like clicking the tutorial and showing an end card that let you track crucial KPIs like engagement rate, time to engage (TTE), and user dropoff. Then you can use these learnings to optimize your creative.

Myth 2: I need to know Javascript or hire someone who does

There’s a common assumption that it takes expert coding skills to build playable ads - that you need to build a playable ad in Javascript (JS). Or that you need someone to build the playable utilizing a JS game development library, like Phaser. But there are several solutions available that don’t require hiring a JS developer, like template builders and Unity. If your game is built in Unity, for example, you can build playables using the assets and code from your game. The platform uses the same engine as your game so you don't need to recode anything in JS.

With Elements, you don’t need any coding abilities to design a high-quality interactive creative. Instead, you use your existing game assets and choose from a selection of customizable templates to build and launch a high-impact playable ad in minutes. For example, Kakao Games used Elements to start designing interactive creatives and improve their entire UA strategy. Within 11 days, they found their new hero creative set that generated 6.8x more impressions and had a 3x higher IPM than the creatives they used when working with an external agency.

This cost myth traces back to the fact that many studios think outsourcing playable production is the best option. But to outsource playables comes at a high price - anything from $3K to $10K per playable, depending on location. Since many studios end up paying an external organization for multiple projects to find the one that works, the costs for each playable quickly add up. Plus, there’s no guarantee that buying a playable from an agency or vendor means it’ll be successful.

Having an internal developer build your playables addresses the concerns around cost, time, and performance. They’re a member of your team who’s been part of the game’s development from the start and can work closely with other teams to build and optimize playables. This usually results in a much shorter feedback cycle and more accurate, better-performing playables than outsourcing. The shorter time spent in this feedback loop, the lower the costs.

Having an internal developer build your playables usually results in a much shorter feedback cycle and more accurate, better-performing creatives than outsourcing.

And having a dedicated developer working with other teams can improve your organization’s internal knowledge-sharing. Building a database of best practices now can shorten the time it takes to find winning creatives later, which reduces the costs associated with testing and development.

Myth 4: If I build a playable, I’m guaranteed to get higher-quality users

The idea of “build it and they will come” doesn’t apply to almost anything in UA - and that extends to playables. You need to design playable ads intentionally and use data to back up your decisions and optimize your strategy.

It’s true that playable ads can lead to higher LTV and user engagement. These creatives give users a taste of your gameplay - if they like the experience, they’ll likely download your game and keep playing. But if your playable is misleading, then users will be surprised when they download and start playing the game, which can lead to high user churn and low LTV.

If your game is a match-3, for example, and your playable only highlights simulation elements like the story or narrative, users won’t understand the mechanic. They’ll be shocked that it’s actually a match-3 game when they install it, and many are likely to leave shortly after starting to play.

Your playable doesn’t need to be a 1-to-1 depiction of actual gameplay, but it should still highlight the core mechanic and concept so users won't be shocked after they install your game.

Your playable doesn’t need to be a 1-to-1 depiction of actual gameplay - the goal is to reach your target audience, and showing gameplay that’s a slight departure from the original can help attract the right users. Just be sure you’re still highlighting the core mechanic and concept so users are hooked for the right reasons and won’t be unpleasantly surprised when they start playing your game.

The quality of your playable matters, too - this is your chance to get users hooked on your game. But a low-quality playable creates a poor user experience that will likely fail to hook users and can reflect poorly on your game. For tips on building high-quality playables in-house, check out this eBook. Some key tips include:

Myth 5: Any end card is a playable ad

Many studios think a GIF or one-click experience at the end of a creative is a playable ad - but this isn’t the case. A GIF as an end card is fine for some mobile creative strategies, but it doesn’t make the same impact as having a standalone playable ad or playable end card. The depth of the experience has a big impact on user quality, and these two examples often mistaken for interactive ads aren’t as deep as the real thing.

Interactive creatives give users a taste of your game and encourage greater engagement in a way that just watching a GIF or a video - or tapping one time on the screen - does not. You should approach building, testing, and optimizing Interactive end cards (IECs) differently than any other ad unit - even from playables. 8SEC, for example, was relying on GIFs as end cards for their game Hero Squad. But using Luna Elements, they easily created high-quality IECs that helped their title achieve over 74 million impressions and improve overall CVR by 30%.

They’re just as important for reaching and engaging new users, though, which brings us back to the earlier advice of not limiting yourself to certain types of ad units. Test IECs, playable ads, and other versions of end cards to make sure you’re not missing out on either incremental users or a hero creative set.

So there you have it - consider the 5 most common myths about playable ads officially dispelled. Designing playables in-house is a key way to achieve incremental growth and optimize your UA, all while saving on costs, time, and resources. Put the truth about playables into action and start building your own ads today so you can enjoy all of the advantages these interactive creatives provide.